City builders and investors enjoy a marriage made in heaven and the celebrant is booked solid. New city plans are often announced in the news and that represents a glorious chance to get onboard at the ground floor and see admirable gains. Yet it’s not that easy to build a city, and getting it wrong is a costly mistake. You need some armor to protect you from the perils of investing in a ghost town, a slum or a city vulnerable to financial, environmental and social shocks. A solid framework puts you in the position to select the right deal so you can plan for the future with confidence. These 8 principles might surprise you.

Both investors and city builders want to finance projects. The problem is there is a lack of investment grade data and specialist knowledge about city building. The usual go to specialists are real estate developers. But most real estate developers found in existing cities play by different rules. They can afford to be shortsighted because they piggyback on an existing culture and successful GDP. However their focus on a quick buck will undermine the quality that a long-term investment needs.

Truly profitable cities depend on good design, along with good ROI and risk outlooks. There are thousands of design principles, some with and some without profit return data, and there are thousands of alternative indicators, also often without profit driven motives. Which are the important qualities long-term investors can’t afford to ignore? When you have the right framework you don’t need to rely on a sales pitch to see what has true value.

Let’s cover first base. The traditional approach is to look for good return on investment and low risk. While there are many existing cities grooming projects for investors[i], there is also another class of project that is worth considering. New cities, roads, power and buildings in emerging economies have the potential to provide good return on investment.[ii] John Macomber, an expert in city investment, published in Forbes and a Professor at Harvard Business School says new cities provide:

This makes new cities an exciting new investment product with plenty of demand.

So how do we deal with high risks? We can approach it the same way as other infrastructure investments. Global Infrastructure Investment Index by ARCADIS helps select countries with the right risk profile.[iii] While developed for infrastructure, the factors also apply well to cities. For example, the rankings consider the legal framework efficiency and this can determine how long approval for the city master plan takes. The risk of political instability affects the project if the government renegotiates on agreements just as in other infrastructure investments. The financial performance of the city is affected by the extent of taxation and the ability to attract businesses to the project. In effect, the investability rating can be used to select lower risk countries or economic zones.

Principle 2: Use the available Infrastructure Investment Indexes or apply the principles to lower the risks of your project.

Phu My Hung in Vietnam, is an example of a successful planned city that was started around 20 years ago.

“(Examples of) fully integrated, standalone new cities took on security, education, communication, and governance rather than depending on – or leaving it to – government alone.” [iv]

Short-term real estate traders did not develop Phu My Hung and as a result it took onboard all the elements to make a successful city.

Yet another reason to provide complete services is cities with the greatest amount of built assets have the highest GDP (Figure 1). Traditionally existing cities in developed countries had unbeatable economies but that picture has changed. Emerging cities are in good position to overtake existing cities whose built assets are aging and need to be replaced. The effective competitor will build high amounts of quality infrastructure to overtake bureaucratically tangled existing cities. Indeed, McKinsey predicts that in the next 15 years the members of the top group of 600 cities with leading GDP will change, so that one out of every three developed cities will no longer make the top 600, and 136 new cities will enter the ranks.[v] You want your city to rank in order to best capitalize on your investment.

Principle 3: Provide complete service to improve the city’s ranking in the global economy. 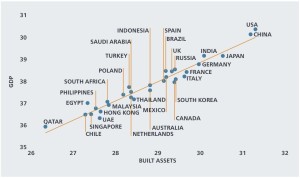 What everybody should know about complete services.

A survey of global real estate and civic leaders, titled “Shaping the competitive city”, sought to answer how real estate developers and investors think about infrastructure. The decision where to make a real estate investment was most strongly influenced by the quality of infrastructure such as transportation, telecommunications. There is a premium that people are willing to pay for access to infrastructure. Additionally, quality of schools and availability of recreation and cultural attractions are also important considerations.[vii] Indeed, while some maintain people follow jobs, it is contended that the affluent middle-class now seek lifestyle first meaning that for some jobs, like in the tech industry, it is also true that jobs are following people.[viii]  This means that while hard infrastructure is important, soft infrastructure is a big consideration too. Leaving these elements to government rather than developing fully integrated standalone cities is leaving a critical factor of success up to chance.

Principle 4: Add soft-services and amenities to your investment plans because it will make sure your hard-services pay-off in spades.

Look at the requirements for a prosperous city as an opportunity for investment. Inside a city there are dozens of individual financial vehicles for infrastructure assets. There are key infrastructure requirements of energy generation, water supply and sanitation, schools and hospitals, all part of the package investors can get involved in. Plus soft-services also bring profit if you know how to refocus old solutions with new ideas and proper metrics.

Do you recognize the early warning signs of city collapse?

Detroit was in a vulnerable position for quite a few years even though GDP failed to provide the early warning signs. In Detroit GDP was (mostly) increasing (with the exception of 2007-2009), but despite a rise in GDP the city of Detroit filed for bankruptcy in July 2013 with debts of around 18 billion US dollars.[ix]

GDP fails to predict the true livability of a city. Using the wrong metric creates chronic vulnerabilities to shocks, such as the financial crisis that affected Detroit.

An alternative index such as the genuine progress indicator (GPI) would have told a very different story. The GPI subtracts social negatives such as unemployment and crime, while GDP adds them as productive output. Perhaps unsurprisingly, the GPI of Detroit was not calculated and $18 billion US dollars in secured and unsecured debts were amassed to creditors such as pension funds who may have reconsidered the investment if they had had the full picture. In the hunt to uncover Detroit’s GPI I found one project measuring performance, called Data Driven Detroit[x], which provides a quality of life index for the years 2009 to 2012. In 2009 Detroit had the second to worst quality of life within the measured cohort, along with high crime and high unemployment. A better indicator, such as the GPI, probably would have shown the problem earlier and resulted in better quality decisions leading up to the financial crisis.

Principle 5: What gets measured matters. Don’t rely on GDP for financial information.

Cities are also vulnerable to social and environmental shocks, which can cause at least as much damage as a financial crises. Social shocks, such as the recent revolutions in the Arab world, stem largely from inequalities, as has been demonstrated by a growing number of reports. These reports also show that social cohesion improves economic productivity.

“The key idea that has emerged to link these concerns is that social cohesion improves economic performance. This is a more positive way of saying that social division and fragmentation undermine long-term economic success.”[xi]

Indeed, this makes complete sense. The more prosperous members of a society, the more society as a whole produces, whether you measure that in currency or any other softer metric. Communities with greater equity have many more active members of the economy, who have the ability and willingness to pay for services.

Most people also realise that environmental shocks can have devastating effect on the economy. The world will experience more extreme weather events as a result of climate change, and these environmental shocks have the potential to damage not only built assets but other life support systems such as agricultural productivity and access to clean water. Economic activity has already affected the environment. Take for example the damming rivers, irrigating crops and sinking bores interfering with the water cycle. Water shortage can have a profound effect on a city, causing it to be abandoned if too extreme. Any wise investor is learning to hold assets resistant to environmental shocks, and this selective behavior is driving a growth in the willingness to pay for the ‘green premium’ and the assets that won’t sell earning a ‘brown discount’.

Principle 7: Choose the green premium or you will be left baring the brown discount.

The metrics that take quality of life and environmental health into consideration are protecting against these shocks. In a UN Report, 2012/2013: Prosperity of Cities, explains that there are interdependencies between five dimensions that support each other to create prosperity, just as spokes support a wheel. “It is a two-way relationship, absorbing and amortizing any ‘shocks’ transmitted by the ‘spokes’.”[xii] The five dimensions or ‘spokes’ they consider as inter-related are: Productivity, Infrastructure, Quality of life, Equity and social inclusion, and Environmental Sustainability. Make sure your metrics are measuring these five elements in meaningful ways.

Principle 8: The right metrics show you when your design is performing.

Short-term thinking is short sighted when looking at cities. An equitable top tier city will mean that there will be many customers, with a high quality of life, and with the ability and willingness to pay. Not only does it secure long-term investment against many different forms of risks but it provides the opportunity for an admirable return on investment. Once investors have effectively dismantled the barriers to investment they have a greater variety of good investment options, and the ability to confidently plan for the future. Not only that, with any luck, it will be a better city for our future.

Get the Sustainability Dividend

[i] In Europe for example, the JESSICA program, short for Joint European Support for Sustainable Investment in City Areas, has been set up to help cities promote urban development to secure investment. JESSICA program, http://www.jessicafund.gr/index.php/about-jessica/what-is-jessica/?lang=en

[iv] The Fantastic Horizon: How To Invest In A New City, Forbes, John Macomber, December 2013, http://www.forbes.com/sites/hbsworkingknowledge/2013/12/04/the-fantastic-horizon-how-to-invest-in-a-new-city/

[viii] Albert Saiz, urban economist from MIT Urban Economics Lab, “As recently as 20 years ago, we tended to believe that people followed jobs. It is still the case that productive areas are becoming more attractive for housing demand, but it is also true that jobs are following people.” http://economistsview.typepad.com/economistsview/2014/10/what-makes-cities-successful.html